So this happened. Appeared in The Age written by Michael Fowler. 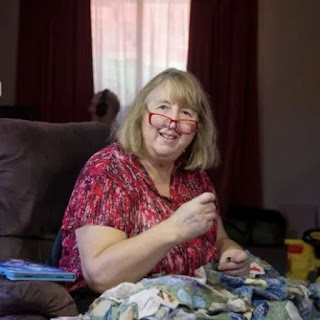 Janet MacFadyen’s quilts have been raffled by the Armenian embassy in Paris to pay for orphanages, and were flown to Indonesia after the 2004 tsunami. At the turn of the century, she would regularly drive a trailer full of them from her home in Shepparton to Puckapunyal, where dozens of citizens from war-torn Kosovo had taken refuge.
The 68-year-old has lost count of how many quilts she has also provided – via the Oz Comfort Quilts social enterprise she started in the 1990s – to domestic violence victims and people affected by natural disasters such as bushfires.
A fabric comforter may not seem essential in a crisis, but its meaning can be seen in the faces of those suddenly in possession of something carefully crafted and delivered with care.
“Domestic violence victims leave home at a moment’s notice. Often their confidence is destroyed, they’re lacking the self-esteem you would expect,” says Ms MacFadyen.
“When someone you don’t know gives you a nice quilt, for you and your kids, you think, ‘Perhaps I am worth something after all’. Women’s refuges often give them out [to women] when they are ready to leave. It’s an acknowledgement of them moving on to new things.”
A health manager in regional Victoria for decades, Ms MacFadyen made a pastime out of taking donations of fabric and finished products from fellow quilters across the world to those in need, including after the 2009 Black Saturday bushfires.
“We donated 2300 quilts to the [badly affected] Kinglake area, driving trailer-loads of sewing kits up there,” she says.“We went to the school, where there were kids who had seen things no kid should see. But it brought them so much pleasure because each quilt is different. Lots of the boys wrapped it around themselves. It’s like a shield against the world.”
The quilts also helped the community reconnect: some locals took a stockpile and distributed them to neighbours.“Instead of outsiders coming in, it was a collaboration that I think helped the community address its grief,” Ms MacFadyen recalls.
Most of her quilts are delivered anonymously, sent to foster care homes and women’s refuges without her ever meeting the recipients.
It’s little surprise, then, that she thought her Order of Australia Medal for service to the community through charitable organisations was a prank.
“I rang them and said, ‘I’m just checking if this is a hoax.’ I really didn’t think it was real. They told me it was and to not discuss it with anyone.“I replied that even if I told anyone, who would believe me anyway? It’s just another type of social work. I don’t do it for money, I do it because I love to do it.”

I still can't believe it and just want to thank everyone who has supported me with Oz Comfort Quilts to ensure that people in need know that we're thinking of them.

Many thanks for all your kind words. It means more than I can say.

Well Done, all those quilts so well dererved, from canada wishing you well

Well deserved for all the great work you've done over many years.

Congratulations, well deserved for all that you do.

I saw you on the news and was thrilled for you. Congratulations on your great work. It is well deserved