Quilts for Kids in Foster Care. 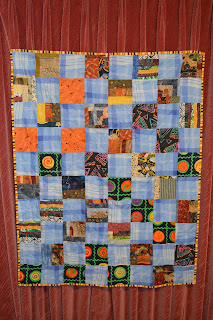 The sewing machine has been running non stop for a few nights so I could get some more quilts finished and clear more room in my sewing room. A work colleague made these tops for me a few years ago, as she loved sewing. I used to cut up all my scraps and donated fabric scraps into 6 inch squares and she would then sew them together, trying to put kid's prints in the mix. They are simple but the kids love them so these make up the 20 I will be delivering to Anglicare this week for kids in Foster Care. 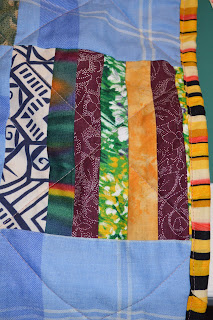 Some of the square blocks were made up from various strips of random off cuts. 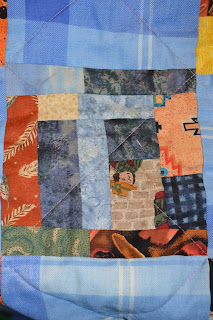 I call these "crumb" blocks as I used to just keep joining scraps until they could be cut to a 6 inch square. 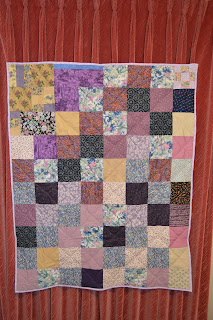 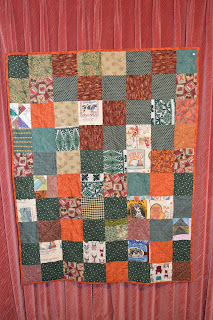 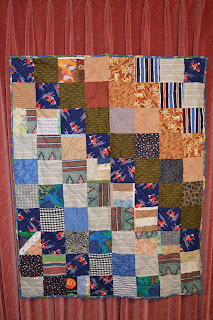 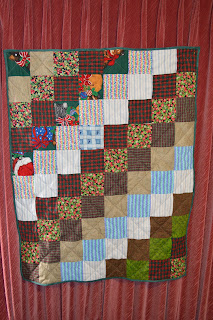 As you can see they are simple but will bring comfort to a child in need of a warm hug. I still have more tops to finish and the pile of squares isn't diminishing as I am still cutting up scraps but I can see progress in my scrap bins, even if no one else can. LOL
Hugs, Jan Mac 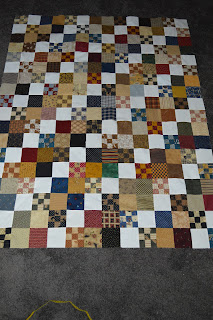 While I have been packing and unpacking my sewing room I have uncovered more donated UFOs so I am finishing them for donation and to make room for more of my stuff. These lovely little nine patches measure 3" finished and they were in a large bag with the alternate blocks of four patches. It's been fun to get them pieced together and into a top. I think I will add borders and this will make a nice male quilt for a Peter Mac client.
Peter Mac have also asked for quilts with a Superhero theme for the kids undergoing treatment as they call them their superheroes. I have started making some blocks but it takes time so if anyone has any blocks with that theme, that they would like to donate, they would be very welcome. 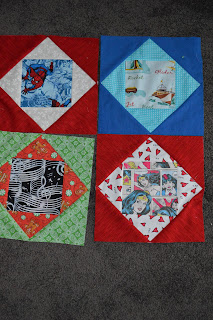 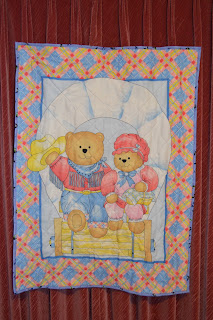 I quilted a cot panel and the picture below shows the squares I made for the backing, and I then quilted diagonally through the squares from the back so I didn't have to mark the quilting lines. 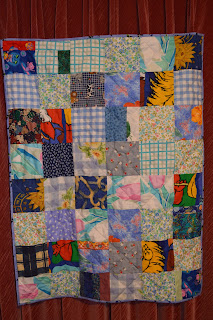 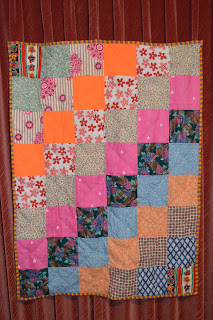 I also found another top made from scrappy squares and used the donated top shown below as a front or backing. Again it made it easy to quilt using the squares and these quilts will be going to Anglicare for kids in Foster Care. I am busy getting 20 ready to drop off next week and just have one more to quilt and 4 to bind over the weekend. 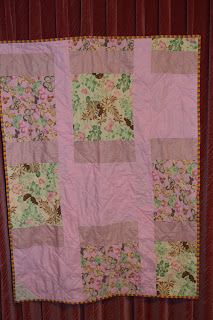 It's great to get some of these lovely treasures finished and off to homes to give some kids a warm hug.
Hugs, Jan Mac
Posted by Jan Mac at 8:00 PM 3 comments: 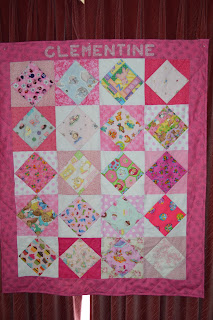 I had such big plans for finishing quilts, unpacking and decluttering as I unpacked. Instead very little sewing and quilting has occurred in the past 3 weeks. Instead I've been busy being Nanna to our dear little grandson as he hasn't been well but is improving now and thankfully we are all catching up on sleep again.
In the meantime 3 more babies arrived in the family and there was a race to get a quilt finished for Clementine before the family returns to New Guinea. Last time they had a baby they left Australia before I finished Spencer's quilt so I wanted to make sure I had one done in time for this baby so I made one for a girl and one for a boy. I still have another boy quilt to finish off but will have that done very soon. Two of the babies arrived early and one was a girl and one a boy so I got lucky and just had to add borders and applique the babies' names. 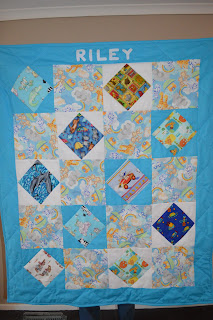 Little Riley is a cousin to the new babies, 3 in the same family in 3 months, and poor little man had to wait for his quilt as we were so busy with Jake. Jake doesn't have a cot quilt yet but he will have one before he's large enough for his cot.
I still have 2 more nieces expecting babies in the next 4 to 6 weeks so I'm planning to get a start on the blocks soon before we get busy with Christmas. Of course we are still moving stuff from the farm and have cleared out our large shed which was a huge job, so now we have just the house to go. Even that is a big enough job. We have until the end of November but we just want it done now so we can take life a little easier and enjoy more time quilting.
I hope life is treating you well wherever you are.
Hugs, Jan Mac
Posted by Jan Mac at 6:13 PM 3 comments: