Still On The Road 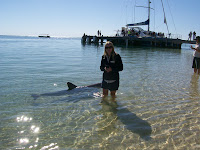 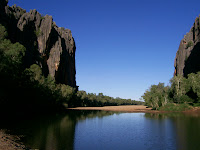 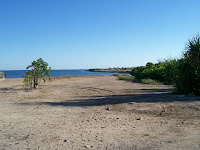 We've been on the road now for over 6 weeks and have finally reached a town where we could get a caravan site with power as well as the internet. So far we've camped on the beach at Kalumburu at the top of WA, visited Windjana Gorge and Tunnel Creek, seen the dolphins at Monkey Mia, and visited the memorial to HMAS Sydney in Geraldton.
Due to the large number of people traveling we've been unable to get powered sites or access to the internet so it was lovely to finally be able to catch up on phone calls and the internet.
Tomorrow we're off inland again and we're going to Kalgoorlie and Gwalia to see gold mining towns. I think we'll be heading home from there and will leave seeing Perth and the southern areas of Perth until next time.
As we've been 4 wheel driving we've been on many corrugated and rough roads and have camped in the bush for most of our trip, so we're starting to look forward to the comforts of home again. We're having a great time but I am looking forward to getting back to my quilting again. As we've been camping all the time I haven't been able to do any sewing without running the risk of getting it soiled with red dust so I've been crocheting blankets and knitting beanies for the homeless. I'll add a tally when we reach home.
Take care everyone and I will write more frequently when we return home as we probably won;t have much access to the internet again while we go inland across Western Australia.
Hugs Jan Mac 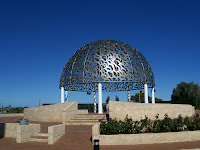