Clinic in the Mountains 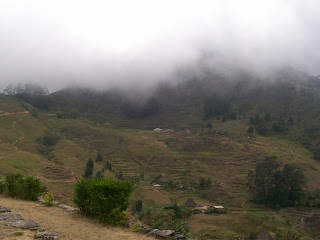 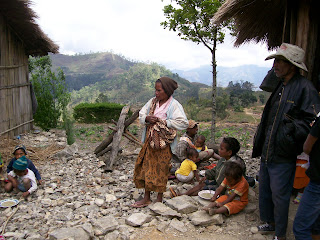 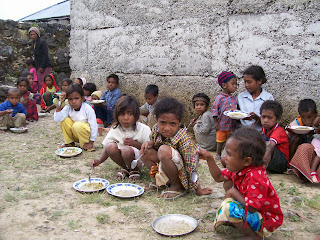 Some more photos of a medical clinic in the mountains. The children under 5 were all given a midday meal of high protein and milk which had been supplied by the government and carried by the clinic staff to the village.
The photo of the clouds was taken at 5pm and we were still seeing patients. Many had a long walk home after the clinic so we were lucky to be driven back to Maubisse.
Posted by Jan Mac at 8:18 PM 1 comment: 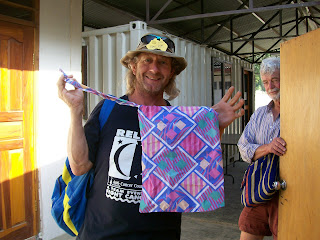 This is one of the rice bags made for Hiam Health, an organization which distributes free rice to the people who are suffering from malnutrition. They use the bags to refill each time the people come for more rice and this helps to keep their costs down.
They work in Dili and do a wonderful job with saving the lives of many people.
The bags measure 35cm (13.5") across by 50cm (19.5") down. Then turn down a 2cm part for a drawstring to go around the top of the bag. Make a drawstring to measure 140cmx 2cm (55"x 3/4") wide. You can overlock or just sew the drawstring together.
Just email me for an address if you want to make some to donate. You can use fabric which isn't suitable for quilts but not rubber backed fabric, in case it rubs off into the rice.
It's another good way to give some help to others.
Posted by Jan Mac at 12:37 PM 3 comments: 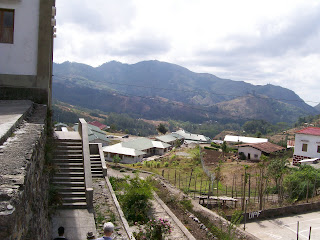 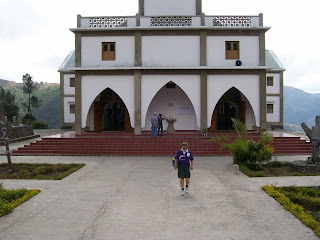 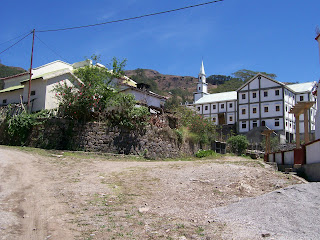 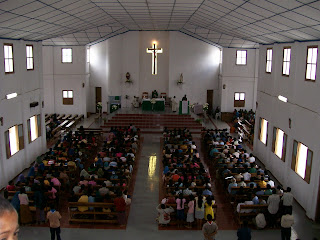 There are two mass services at the cathedral on Sundays. The first is at 6 or 6.30 and and the second is at 8.30am. The service lasts for about 90 mins and the singing was beautiful. The cathedral is the focal point of the town and is opposite the bakery. The view of the outside of the cathedral may give some indication of the steep hill I had to climb to go to the town clinic and to visit the nuns for lunch. The top view is from the cathedral overlooking the hospital (with the green roofs) and looking down to where I was staying. I was very glad that I'd lost weight and had been working out at the gym before I went and yet I was still out of breathe after climbing up to the town centre. I'd better keep up the exercise before I go back.
Posted by Jan Mac at 10:55 AM No comments: 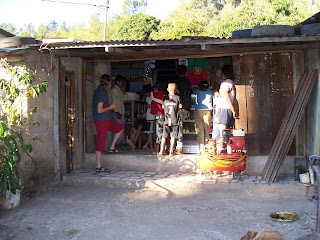 We woke up at 6.30am every day which is as late as we could sleep as the village sounds and the rooster crows start to intrude.
Then a walk up a very steep hill to the bakery by 7am to get the bread fresh form the oven. Here's the bakery and people are waiting for the next batch from the oven to be ready. Bread is 5cents each and is like a small dinner roll. Lovely when warm but hard to get the teeth into and we couldn't eat them if they were a day old.
Blogger won;t load more photos so I'll try again later.
Posted by Jan Mac at 9:45 AM No comments: 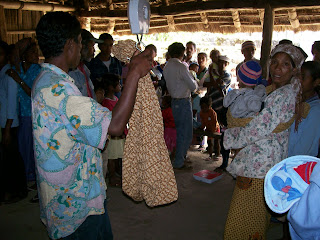 Here's some more photos of the medical clinic where the village's health worker is weighing babies in a sling on the left hand photo. Note the chicken wandering across the dirt floor in the next photo (just in front of the UN policeman in blue). The ladies who give out the medication are to the right of the UN policeman and are shown in the next photo. We started in the same village hut until the day became too dark to see the patients and we moved outside. The people just queued patiently all day while they waited to be seen. 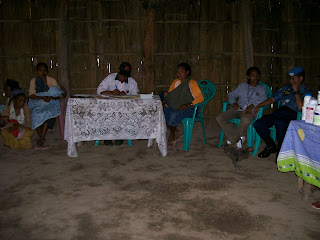 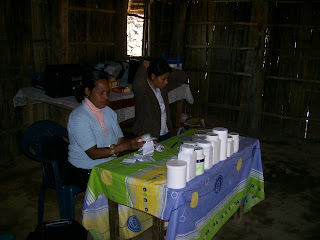 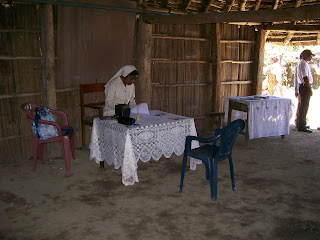 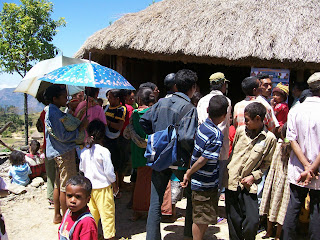 Some of my photos from a mobile health clinic I helped in the hills. It took 1 hour to drive about 5 kms over unmade roads. We worked inside a large native hut with a thatched roof and when the light faded we moved our table and chairs outside. Before we started the clinic we shook hands with the whole village and the people were lovely and tried to kiss my hand. The whole experience was very humbling and I was blessed to have this opportunity. Blogger is slow with the photos at the moment so more to follow. Sr I. is at the table in one photo and getting set up to work. The people all stood in line for hours while they waited their turn. Some queue jumped- I think because they had a longer walk home in the dark. I've never expereinced the provision of health-care as a spectator event but everyone was very respectful but we had to clear the people away at times so we could see in the fading light.
More later if you're not bored. 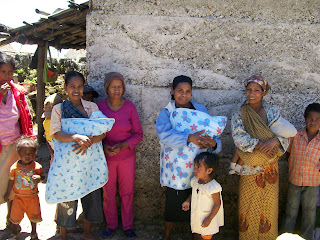 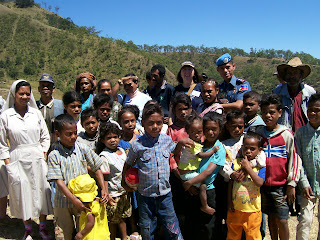 A composite of emails 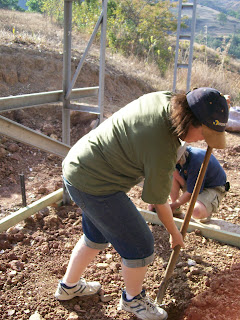 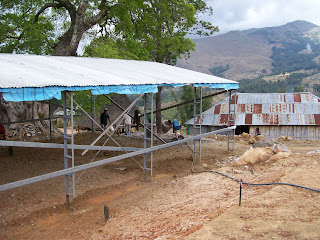 I was part of a group of people who are building a new school at Likitei in the hills out of Dili.
Here you can see the old school in the background and the framework for the new school is already up. We poured concrete for part of the new floor. I didn't work on this much as I was involved in medical clinics but this shows some of the work we were doing. Believe it or not this is the type of school some of these kids attend as shown below. There are plans to build new schools all over East Timor but it's a big job. The chap working in his garden is a typical scene and shows the satellite dish that many have to get Indonesian TV. That is, when the power is on which is spasmodic. It should be from 6pm to midnight but that doesn't always happen. The thatched house is a traditional house which is still very common in the hill district. The house living part is in the roof area at the top. It takes a long time to build these houses but they last for years and then may only need re-thatching. Couldn't resist showing another baby photo with the knitted hat being used. The number of babies is enormous and the need for warm clothes in the hill area is always great. Only at Dili and along the coast is it warm and humid. 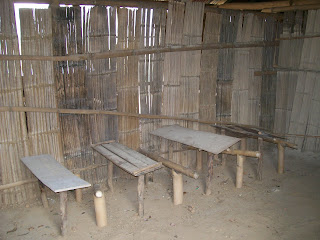 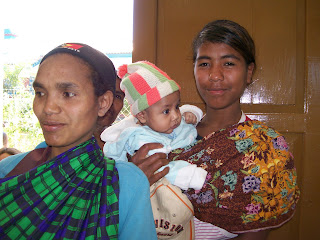 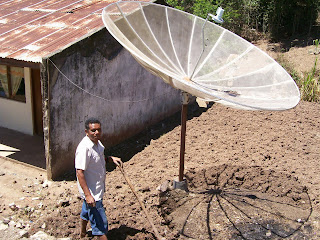 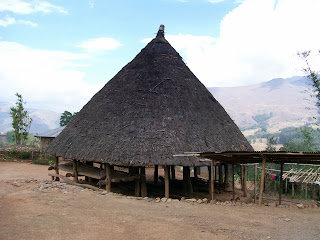 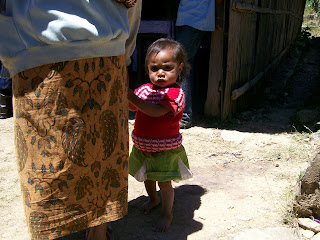 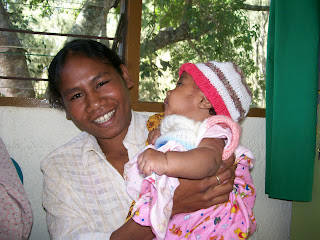 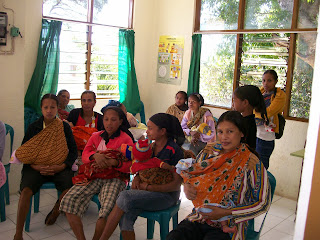 Here are some photos of Mums and their babies at the health clinics I worked with while in East Timor. They were all shy at first but I found that they love to have their photo taken.
I was also surprised to see quite a few babies and toddlers wearing little jumpers/sweaters and hats, which had been knitted using the Aids Babies patterns. They are obviously useful and keep the kids warm. I was in a mountainous area of East Timor and it gets very cold in winter so I plan to make more of these jumpers and hats as well as quilts to keep them warm.
Posted by Jan Mac at 2:31 PM 1 comment: 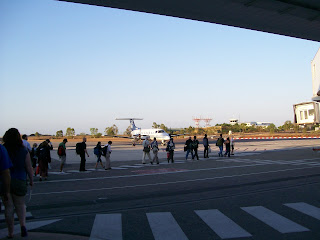 Here we are getting ready to board a 25 seater airplane to fly to Dili after having no sleep. I took about 500 photos and I won't bore you with them all but will take several days to share my news about the trip.
It was more special than I'd expected and I had a wonderful time meeting and working with the people of Maubisse in East Timor.
We flew into Dili and collected supplies and then drove for nearly 4 hours to reach Maubisse in the hills 70km out of Dili.
We were sleep deprived for a lot of the time and now I'm trying to catch up at home. I came back enthused to get more quilts and warm garments finished to send over to the "hill people" where the weather becomes very cold.
More tomorrow when I can think straight. LOL
Hugs JJ
Posted by Jan Mac at 6:36 PM 1 comment: