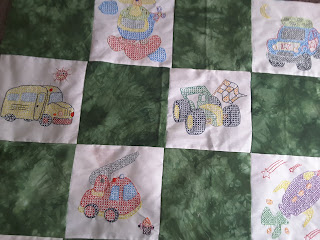 This week it was time to get busy with some blocks and get more quilts finished in time for Christmas donations. The first blocks were stitched and donated by Sue McP from Victoria.  The blocks are really cute with lots of trains, boats cars etc and will be loved by a young boy. 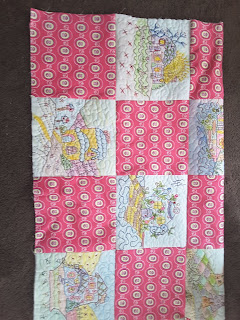 These 12 blocks were also stitched by Sue and are really intricate designs of houses and flowers. They will make a lovely quilt for a little girl. 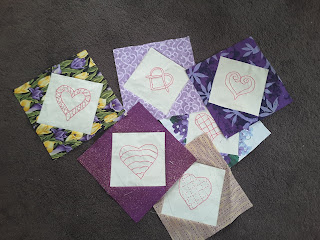 Sue also included these lovely stitched blocks of hearts and I will make 2 more to add to this 18. Many thanks for all of your beautiful donations, Sue. 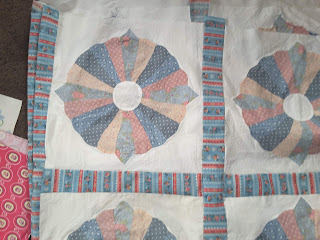 These blocks were from a damaged quilt and I rescued those which were undamaged and reset them with new sashing. It should look good with new batting. 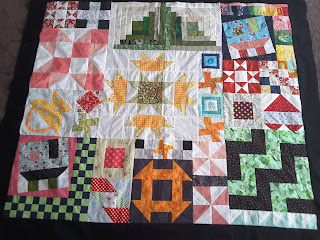 This quilt top was donated by Jo from Qld and I have divided it in half as Jo's original top was much larger. It is in the pile to be quilted and will be finished soon.
My night cough has finally gone and it's good to be back into quilting again.
Thanks for stopping by.
Hugs, Jan Mac
Posted by Jan Mac at 7:33 PM 1 comment: 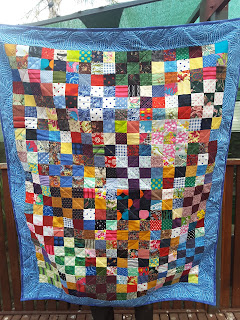 I have devoted this week's sewing time to quilting 6 more quilt tops for AQA, my quilting group. Our members make lots of blocks and tops and I am more than happy to be one of the quilters who finish them off as quilts. We had quite a few older tops languishing in the group's storage space so I am trying to get those finished to make room for newer tops. We've donated 240 quilts in the past 12 months as we get lots of help from our members. 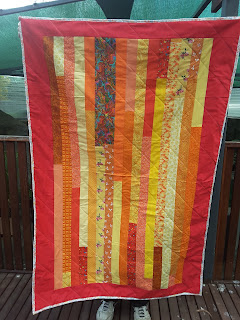 We encourage members to assist with the sewing tasks that they enjoy and we have at least 2 ladies who are very skilled at putting together kits for members to stitch at home, as well as makjng up blocks and kits for blocks from the fabric we have received as donations. Sometimes a skill share day is organized and a new pattern or technique is taught. A Jelly Roll Race day meant we received lots of jelly roll quilts.  Some of them were too big for gift quilts so we have been making the tops smaller prior to quilting them. 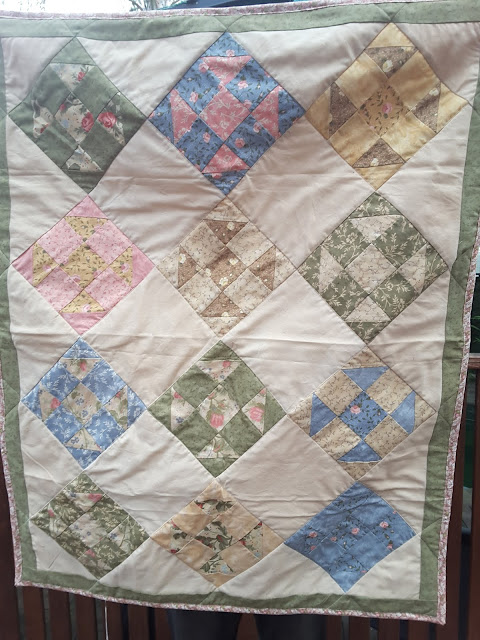 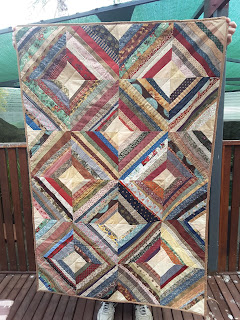 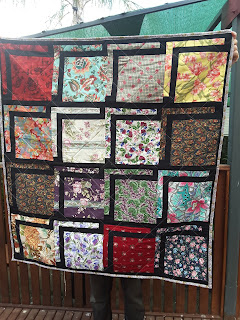 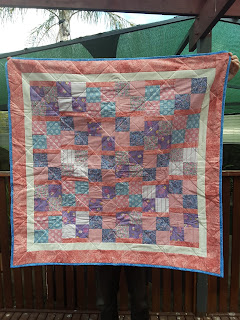 I love the scrappy nature of the first quilt I shared in this post and when I examined it more closely I could see that it was constructed from donated 9 patch blocks, combined with 9 patch blocks made from random squares. The borders are a lovely addition and this is one of my favourite tops I have quilted. 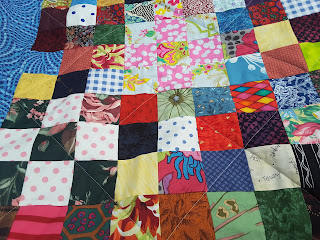 I'm still coughing at night but I am grateful that I am improving and able to get back to some quilting too.
Hugs, Jan Mac
Posted by Jan Mac at 3:18 PM 2 comments:

A Change of Pace. 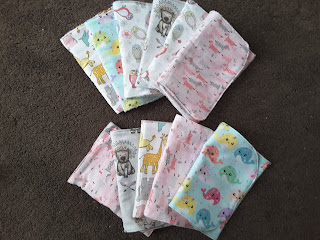 The stress of our trip must have had some effect as I came down with a nasty head cold and lost my voice.  Plenty of fluids, aspirin and early nights means that it's passing quickly thankfully and I am managing to look after Jake as long as I have a nap in the afternoons.
My DD wanted some baby hurp cloths made as gifts for friends so I did get some sewing done. I made some for baby Jake too and they are very useful and relatively quick and easy to make. Both friends are having girls so almost all if the scraps were used up. I still have lots of scraps left over from Jake's too so it mighf be a good idea to get a head start on some for future gifts.
I have also made time to pin baste more tops for AQA so will have more quilt finishes to share soon.
Hugs, Jan Mac
Posted by Jan Mac at 7:33 PM 1 comment:

Not What We Expected. 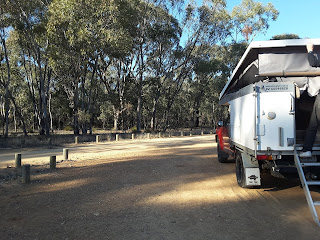 We were worried about how well little Jake would travel and how long it would take to get to Fraser Island in Queensland but he was really no problem and travelled well with breaks every 2 to 3 hours. We enjoyed the trip up and the warmer weather as well as playing with Jake in parks when we took a break.
However the trip did not go as planned when we were only 10kms from taking the ferry across to the Island. 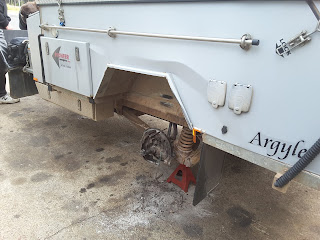 The camper trailer our DD and her husband were towing lost a wheel which almost caused the car to overturn. Luckily Jake was asleep at the time, and even more importantly no one was injured.  It caused a small grass fire and Paul's skilled driving got them off the road without collision. We were a few kms ahead and they phoned us to return. After a few hours of waiting,  a tow truck picked up the camper and took it to the nearest town of Rainbow Beach. Their car was not damaged but their accommodation was no longer available until the trailer was repaired and no parts were immediately available. After a couple of days of trying to make arrangements to repair or return the camper to Melbourne, we decided to have it repaired locally when the parts arrived and we continued on down the coast with the use of cabins and motels. 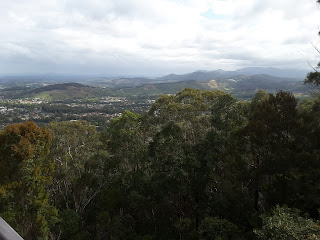 We tried to make the best of the time we had and travelled as far as Coffs Harbour, in News South Wales.  The weather was lovely and warmer than Melbourne and we enjoyed a few days at the GlassHouse mountains and Australia Zoo. 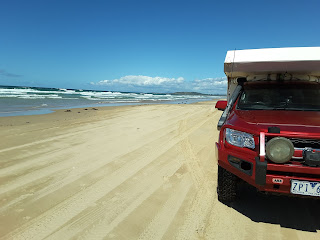 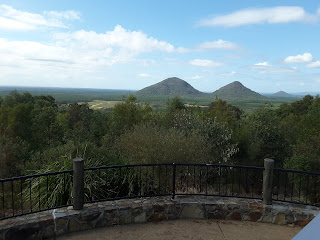 We travelled back to Rainbow Beach to wait for the camper trailer to be repaired and our DD, her DH and Jake made their way back to Melbourne in time to get back to start work. We were lucky to be only held up by 1 day and it was a relief to have the repairs done and return home without further problems.
It wasn't the holiday we'd hoped for but tried to make the best of it. Little Jake was a delight and it was lovely to see him enjoy his time at the beach. 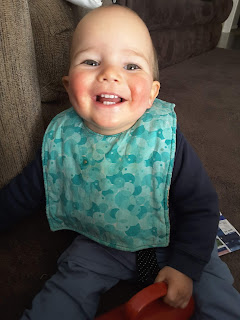 He took his first steps today, after gaining his confidence, and he will soon be racing around the house. Actually he's already racing around the house while he pushes his little toy train or toy walker around to help his balance. He can stand without holding onto anything but prefers to push his train around. We've spent this week catching up on the washing and unpacking and I hope to get more quilts finished soon.
I ended up taking some hand sewing but I  didn't take a stitch so I will enjoy getting into my sewing again. It's good to be home and away from the sandflies too as we were bitten quite a bit while we were at Rainbow Beach. Thankfully the itching has almost stopped now.
Hugs, Jan Mac
Posted by Jan Mac at 7:56 PM 2 comments: