Oh When The Saints 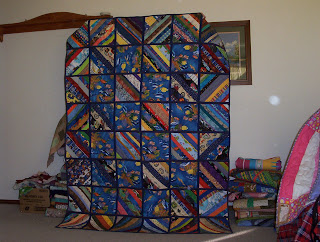 The red, black and white quilt was made for a St Kilda supporter from Kinglake and the team is known as "The Saints". This was a team effort by Kaite Matilda from Bathurst and my blocks. As Kaite said they looked like they were matched by us and yet we didn't see what the other person had made until they were put together. Great job Kaite as it looks even better when you see it up close.
The other QAYG quilt was made for a young man who lost his girlfriend in the fires. Anne Bennett from Melbourne had donated QAYG blocks suitable for a male. I needed some with an ocean theme and she had used the ocean fabric as the back of some of her QAYG blocks so I used them and made a reversible quilt. I think he'll love it and I've been making QAYG quilts larger with sets of 6 x 8 for the men.
Time for work again.
Hugs Jan Mac 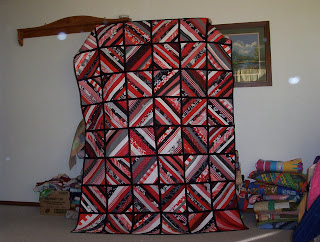 The Saints quilt is a 'winner' that's for sure. And the blue marine one is really different, i like the way you put the blocks together. Well done Jan.
Hugs to you and DH, K.